Fundraising Writer Alert: 6 Things Modern Jargon Is and Why You Must Avoid Them 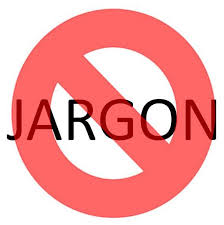 Jargon is the opposite of constituent-centered writing.

You must avoid it because it’s not constituent-centered.
I could stop here, but I won’t.  Because most of us use jargon all the time without being aware we’re doing so.  Why?  Because we only know that it’s ‘bad’ and to be avoided.  Yet how can one avoid something without knowing what it is?
Let’s take a look at some different types of jargon; then vow to stop using it.
Jargon pops up all over the place; it’s more insidious than you think.  Originally, the word applied to trade languages used by people who spoke different native tongues to communicate. Jargon was esoteric, yet it was precisely defined for ease of communication between specialists in a given field (e.g., physics; mathematics; astronomy; computers; medicine; law). This made sense.  And it’s also common sense that we’d want to avoid using technical language when trying to communicate with (or raise funds from) non-technically savvy folks. This would be a simple rule to apply.  But jargon is much more than scientific lingo.
The type of jargon most used today is better described as a buzzword (which often develops from the appropriation of technical jargon, yet is used in a more general way, often inaccurately or inappropriately.) It may be used due to an intentional desire to be vague or, perhaps, to a desire to impress. The key is that the words are used outside of the context where they’ll be easily grasped (click here for a list of common buzzwords in business, and here for a list for nonprofits from trend watcher Lucy Bernholz ).
MODERN JARGON IS:
Jargon is bad because it deters understanding.   Jargon can make it take longer for folks to appreciate what you’re trying to say.  Not everyone will stop to do research in order to comprehend your intended meaning. Most, in fact, will simply give up. Others may pretend to understand; then they won’t act because they really had no clear idea what you were talking about. And all your efforts will have gone to waste. Your goal is to communicate, not to confuse, annoy or anger.
Comb your prose for jargon before you publish anything. This includes your next fundraising letter, newsletter, annual report, case statement, blog post or anything intended for distribution via social media. Don’t forget social media! It’s easy to fall into acronym use when you only have 140 characters. Yet, even though the word comes from old French meaning ‘chatter of birds’, I’d suggest keeping it out of your tweets. Especially on social media, people are looking for simple, quickly grasped content to make it easy to form a split-second decision as to whether to share it.

If folks won’t understand it, dump it. If it sounds stuffy, pretentious or stilted, dump it.  If there’s anything in it that only people in your industry would fully appreciate or understand, dump it. If what you’re saying could apply to a hundred other charities and is not uniquely you, dump it. This is another tip from David Ogilvy: “Never send a letter or a memo on the day you write it.  Read it aloud the next morning — and then edit it.”

Jargon will fail to differentiate you from your competition. You can’t stand out by using jargon, buzzwords and pablum. Jargon won’t help search engines find you either.  How many others are trying to ‘change the world’?  I’ll tell you: Google says 2,490,000,000. Remember: you have a mission and product or service you’re trying to convey as unique.
What are the worst examples of jargon you’ve heard (or found yourself using)?
10 Comments